HI Milo & Angus here! Yesterday we met a new friend called Max. He was a thirteen week old Maltese x Shitzu that belonged to one of Ros' friends. She has just got a new puppy and this is the first week he has been allowed to meet other doggies. So after our early introductions we all headed into the loungeroom to begin playing. 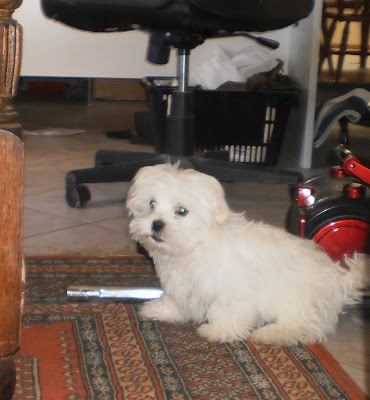 This is Max. Isn't he so cute? At first Max was a bit scared of us because we are a lot bigger than him and I can be quite boisterous when i first meet new doggies so for the first little while Ros put a lead on me so I wouldn't overwhelm Max. 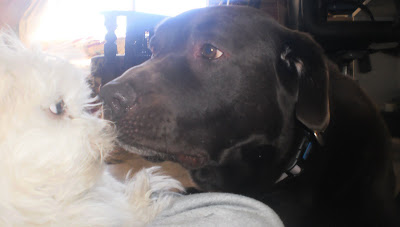 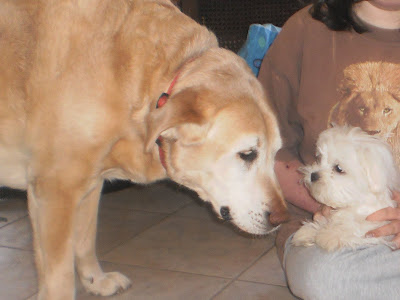 Here we are saying hello to max. Very soon though max became much braver and started jumping around so I was let off my leash and the fun began. We began with bitey face. First I started with explaning the rules of biteyface. Max was very attentive. 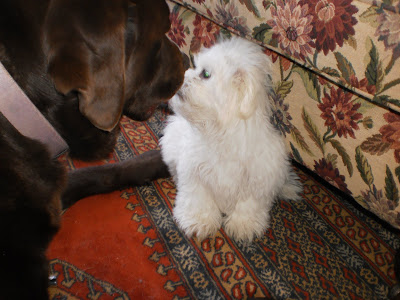 So after explaning the rules the game began. Max caught on very fast and I think because of my great play style max now loves bitey face. 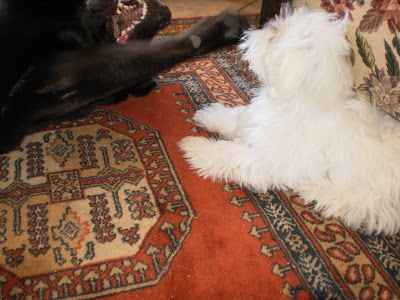 So after playing biteface for a little while ros went and got a toy from her room so we could play tug of war together. 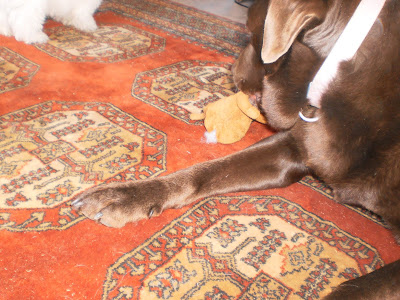 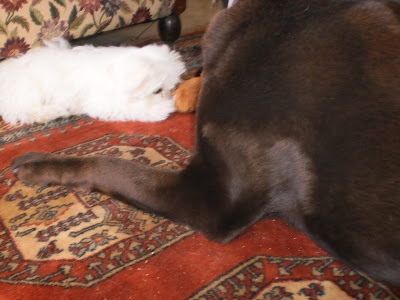 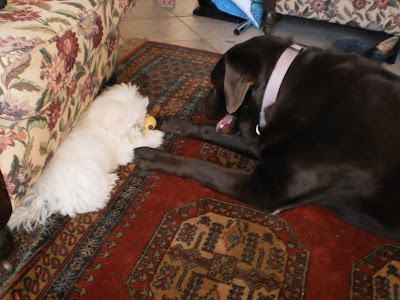 Max had a strange fascination with our tails and paws. It was quite funny. 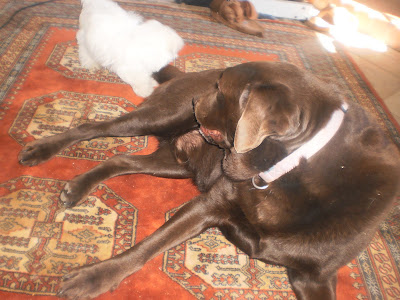 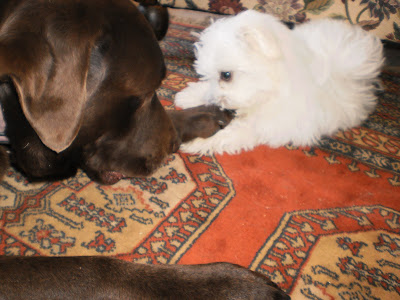 So Max had been at our house for a good hour and he was starting to get quite tired so his owner decided it was time to take him home. We were sad to see him go but we know we will see him again soon as he only lives a few houses away. So we should see Max again soon. We heard ros and Max's owner talking about going for walks together when Max gets older. We can't wait.

FUN IN THE SUN

HI! Angus and Milo here. Yesterday was a great day so at lunchtime we saw Ros grabbing our toys and leashes so we knew we were about to go on a walk. We jumped up ready for our walk and headed to the oval. 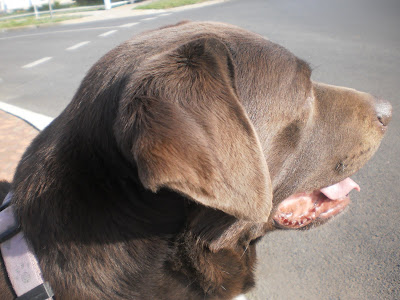 Soon we had arrived and we could not wait to start exploring. We hadn't been to the oval in quite a while so there were lots of new smells to sniff. 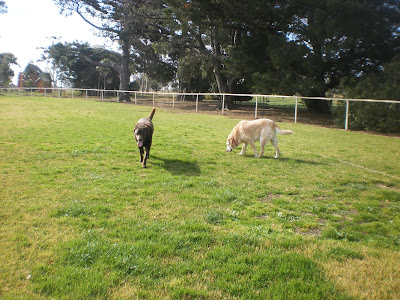 Oh, this smells interesting ! So after have a sniff around we headed off to do a lap around the oval with me leading the way. 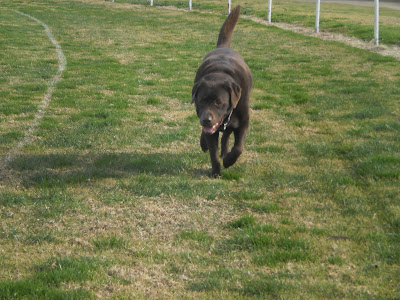 After doing a lap of the oval Ros bought out the toys she had brought with us and the games began. First we played soccer a game I'm very good at. 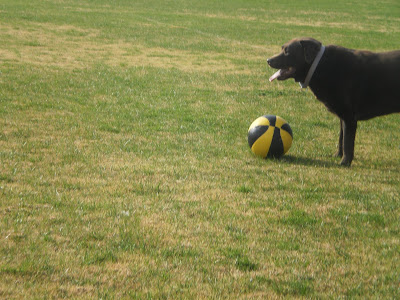 Waiting for the fun to start. I had a great time chasing after the ball. I'm very clever and can use my nose, teeth and paws to move the ball around. Ros and I played keep away and I had to use all my skills to try to keep the ball away from Ros. 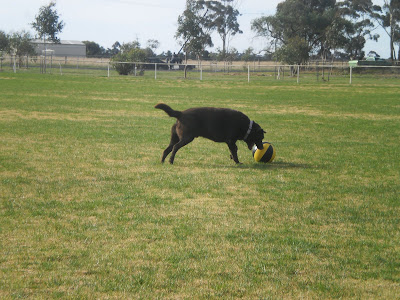 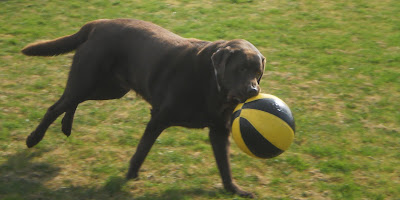 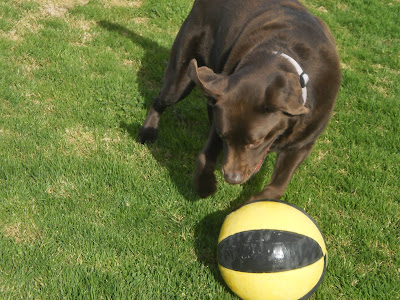 We were having so much fun then I began to notice that the ball was getting smaller. Ros came over and looked at it and discovered that I had accidentally popped the ball. 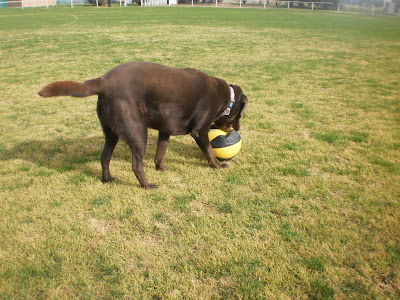 See how it has shrunk a little bit? Well we had been at the oval for a while so Ros decided it was time for us to have a drink. Ros filled up the bucket we had brought with us so we could have a drink. 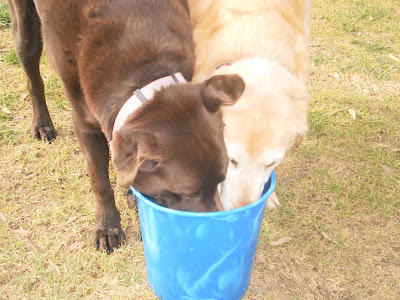 So after having a drink we suddenly noticed that someone else had arrived so we went over to say hello. Once we said hello to each other we all walked around the oval togther and we all had fun playing with our new freind. 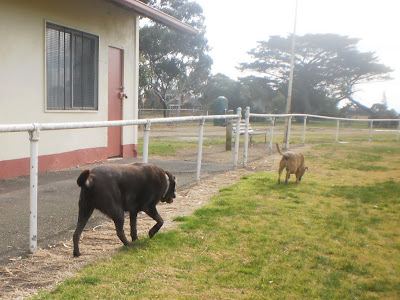 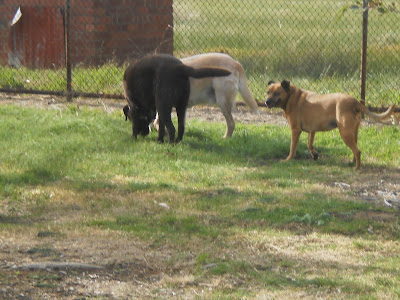 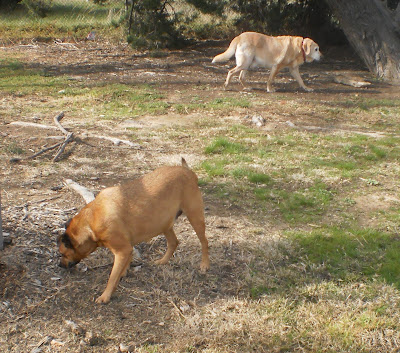 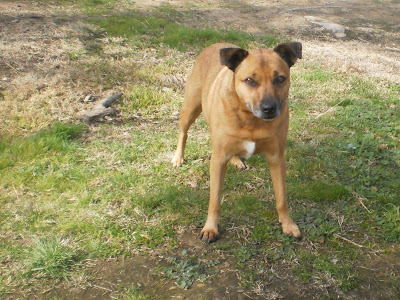 After a little more exploring our friend had to go home and Ros decided it was time for us to go home too as we had been at the oval a longtime and we were both very tired. After all our exploring we had had a fantastic time. We have our paws crossed the weather will now start to get nice again so we can start going on regular walks with Ros and have many more great adventures.
By Milo and Jet - August 02, 2011 5 comments: