Yesterday we were planning to go for a walk but at the last minute my walk was cancelled on the grounds that it was too cold I didn't quite see what they meant it felt fine to me perhaps they need better coats or something so much to my disgust my walk was cancelled. The nerve!!! So after this major disappointment my human was starting to feel bad as she should. So I thought we could play fetch instead.So my human went inside to get my favourite toy. 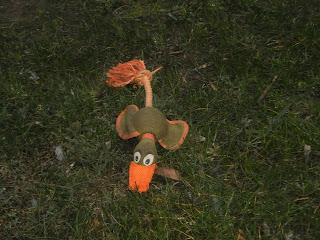 This is my favourite toy . He is good for playing tug and fetching.

So to start with we played tug something i'm very good at.If there was tug olymipics' I recon I do very well. Thought I'm still a good boy when I play and always let go when my human says OUT. Well most of the time. 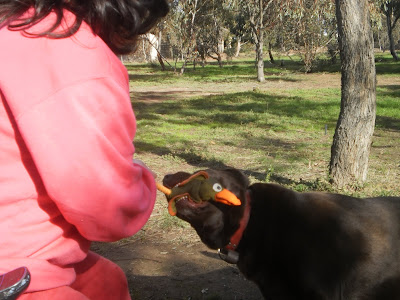 Playing tug with my human not sure who's winning. Must be me.

Then after tug we played fetch. Now introducing my best fur pup friend angus as he said in the first post he's a older than me at 11 he doesn't play as much as he used to but yesterday he made an effort and we had a great play. 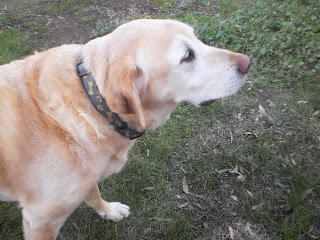 This is Angus my best fur friend.
So the playing commencend. 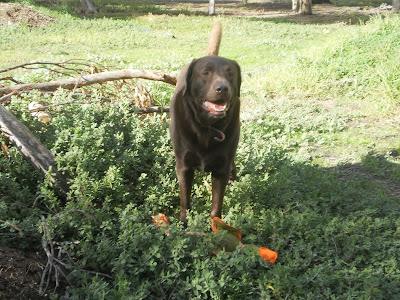 Just caught it.
So then Angus and I played tug . 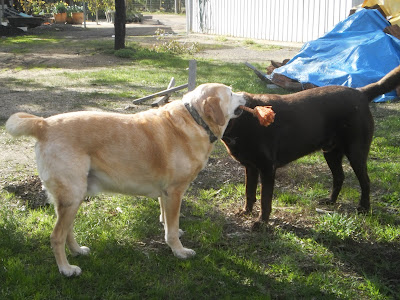 Here we are playing tug with my ducky toy.

Next we played chasie. First my human threw the toy for me and i did a lap of excitement as I always do.Unfortunately my human forgot to take a photo I'll make sure she does next time. 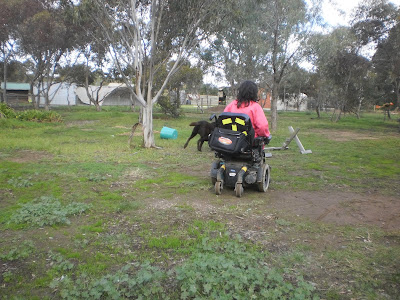 Here can you see my toy.
Then angus and I did some more playing first I did the classic doggy play pose. Begging him to come and get it. 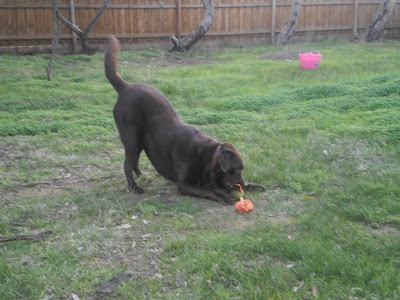 Then I lulled him into a false sence of security. 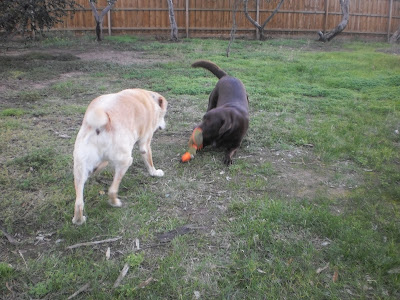 Just as he was about to make a grab for the ducky I ran for it. 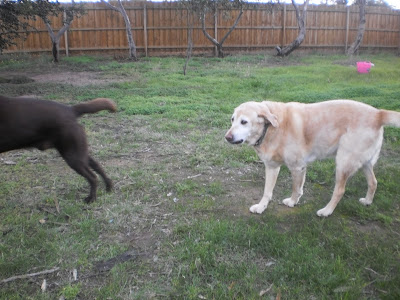 Leaving him behind with a shocked and surprised look on his face but to be fair to him I came back and we had a good play. 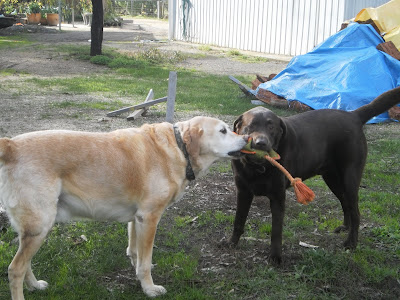 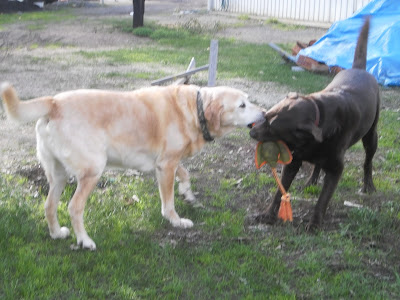 I won my toy back from Angus. 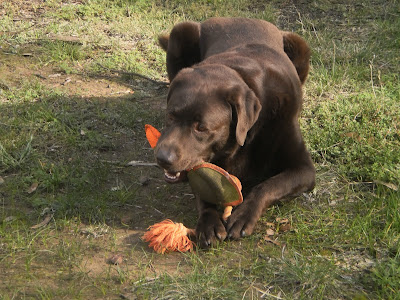 Ahh my favourite toy is back in my firm paws.

I had fun playing today and it did make up for missing my walk today then we came in side for a rest .
By Milo and Jet - June 11, 2010 No comments:

RUN AT THE RIVER

HI! Milo here. Yesterday' I went to the river . Isn't it a nice place? Most of the time I have it all to my self ! 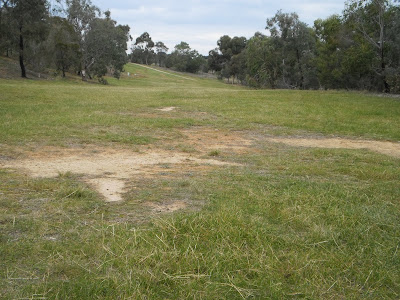 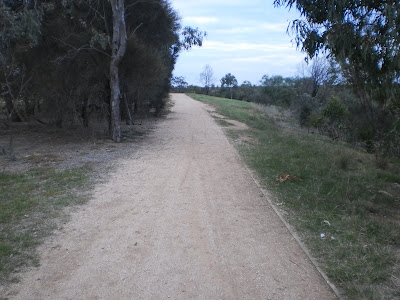 Also there's a great path the whole way along so it's very pram and wheelchair friendly for humans.
There's also a great place to go swiming. Isn't it a great spot? It starts out very shallow then gets deeper. 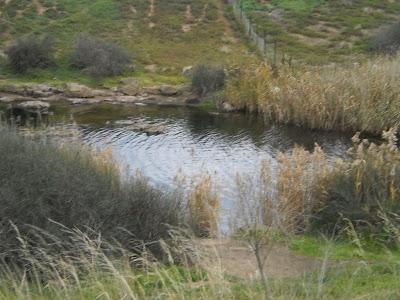 So yesterday my human decided to take me to the river which was great fun but first I had to do a down stay before i was allowed off the lead . Can you believe it? The nerve of my human but the quicker i do it the faster i am allowed off to explore and do what I want. 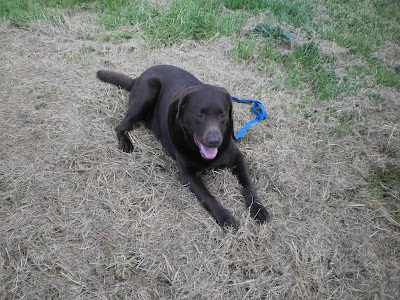 Waiting to be let off.
The first thing I do when I'm let off is have a good sniff around to find out if any other fur pups have come here lately. 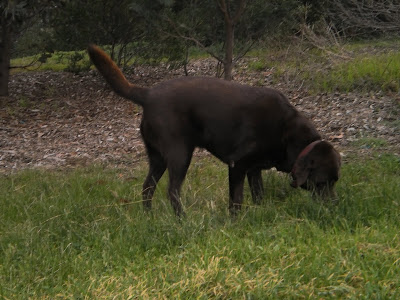 Hum this smell's interesting. I wonder who it was ?
Today when I was there I got to go SWIMMING !! One of my most favorite things to do and even better is when my human throws sticks in for me as I love to fetch wet sticks as they are just so much more fun when they're wet. 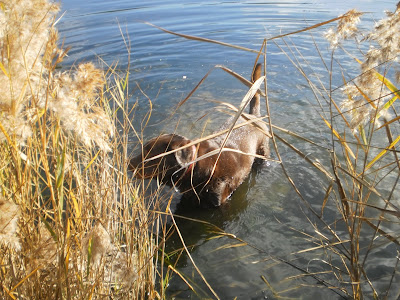 Hear I"m about to go fetch the stick from the river . My human is very good at throwing balls and sticks thanks to my expert teaching . She was hopeless before I came along. Now she has matured into an expert toy thorwer If I do say so my self . 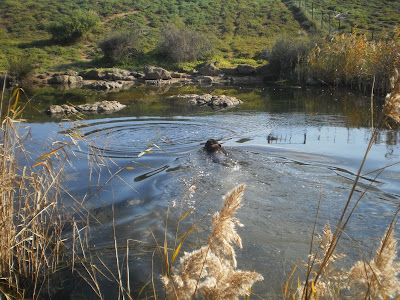 See, just look at how far it went! not too bad ; don't you think ?!
Also there is a strange big bush right near my favorite swimming spot that is apparently called a rabbit warren . I just love to check to make sure whether any one of those rascally rabbits are home 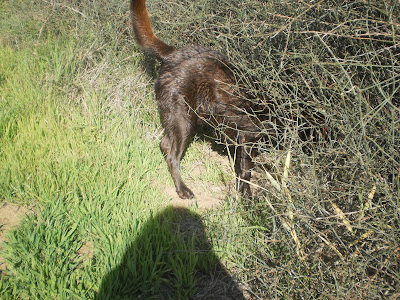 HELLO ANY ONE HOME ? Nope, darn.
So after checking if there was any one home more swimming was needed,so, we had to find another stick . Then the fetching commenced . 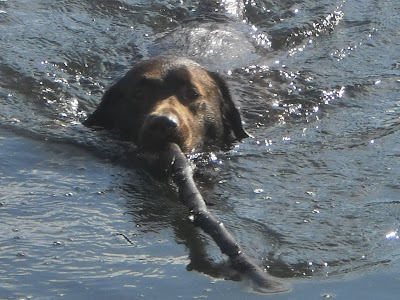 Doggy paddling back with my stick. 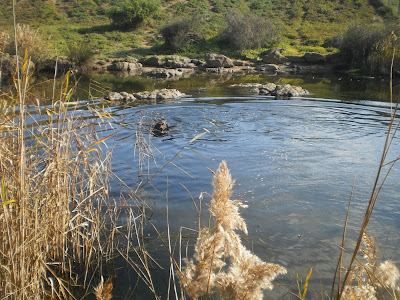 Coming back with my stick. Isn't it a lovely place?
Now I wish to tell every one a secret about the dog shake . Here is my secret about the funnest dog shake. First, you need to be wet and the smellier the better. second you need a distracted human. When they're talking is best or looking for our toys that we have hidden on purpose also works very well. Now you need to practise your stalking skills. Watching animal planet can help as you may only get one chance to try this . So once you're wet and have a distracted human slowly sneak up and then shake as hard as you can. It's so funny to watch their horrified expressions. I have done this hundred of times.It's just so much fun. Once I did it so well that my human had to walk me home dripping wet.

So close!! Next time I'll get her .
Another fun thing to do is to have a nice roll around after a swim . 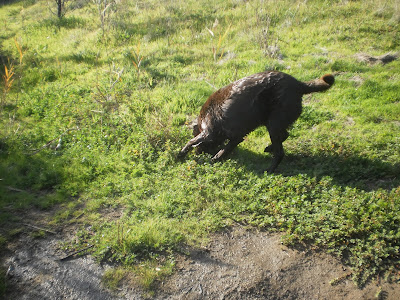