Hello! Angus here ! A lot has been happening with me lately. I was on a walk with ros and her mum and Milo And I were let off our leashes to have a run. I was having a great time when suddenly one of my back legs started to hurt really badly. So badly I had to stop and lie down. When Ros came over to see if I was alright I could not get back up again which was scary as that had never happened before. I tried to get up but I felt like one of my legs was gone so I qucikly sat back down again. Eventually I was able to get back on my feet but I could not put my right back leg on the ground at all and it was a long way home so while ros stayed with me her mum went to get the car. A little while way later ros' mum arrived and between them they managed to get me in the car so I was taken home and I managed to get inside all by myself.
A few days later there was no improvement so my humans decided to call the vet. Our vet comes out to us and they drive around in an amimal ambulance. They're called Vet to Pet and they are based in Lara. We love our vets. We always get excited when they arrive as they're very nice people.
So after we said hello it was time to find out what was wrong with my leg. I lay down to be a good boy so it would be easier for them and after a brief look and moving my leg around a bit it was found out that I had completely snapped my cruciate and anterior ligaments and the only way for it to be fixed was an operation. A week later I was taken In for my first appointment and I was perfect although I do have some weight to lose. So my humans learnt all they needed to care for me after the operation and the price. I had to be brought in the day before the operation so I would not be fed before my anaesthetic.
So two days ago I was taken in for my op. All went well so later that same day I was allowed to come home but I don't quite think I realised where I was as I still very much recovering from the anaesthetic. 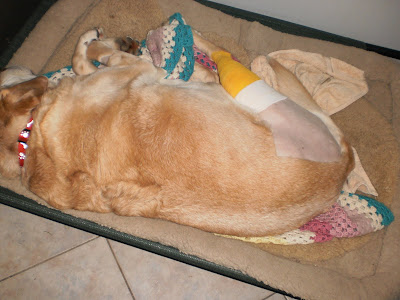 I'm so sleepy.
I was still very sore and was wimping a little bit every so often. During the op they shaved off most of my coat on that side so now I'm somewhat bald on that side. 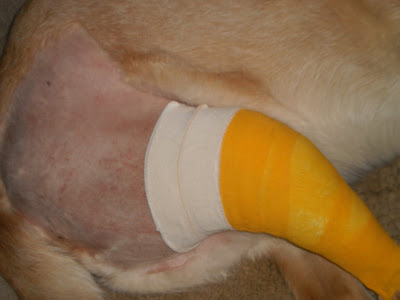 As you can see. They gave me some medicine that I have to take morning and night for the next week or so. They are antibiotics, pain meds and rimadyl; an anti inflammatory.
I have to stay in one spot for six weeks and then I can start going tiny walks again; no more than ten mintutes long but it will be about ten weeks before I'm allowed back on proper off lead walks again. Until then I'll be staying in this. 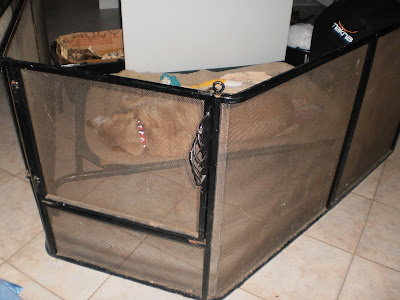 I can't move around at all! I go back to Lort Smith Animal hospital in two weeks to get the stiches taken out. So until then I'll be resting lots. Well,bye for now. We will keep everyone updated.
By Milo and Jet - December 25, 2010